“A human scale is needed to ensure public understanding of the energy transition.” Flickr.com / 10-10-UK CC-BY

“Small is beautiful” was the catchphrase of the alternative energy movement of the 1970s.

Gunnar Boye Olesen of the INFORSE energy network in Denmark still thinks there is a case for building on a human scale.

1974 saw a rising tide of anti-nuclear sentiment in much of the world. The alternative energy movement offered a far-reaching critique not only of nuclear but also of large-scale oil, coal and hydropower.

More than 40 years later, the alternatives are winning. Wind, solar, and biomass are standard options for new power production. All fossil-based and nuclear options are in crisis.

But what happened to the scale?

AN asked Gunnar Boye Olesen, of the International Network for Sustainable Energy (INFORSE), based in Denmark.

“A standard wind power turbine is now 30 times bigger than it was in the 1990s,” he admits and sees no way to turn back.

But, he points out, a wind park in the order of 10 megawatts is still very small compared to conventional coal and nuclear power plants.

A turbine is much too big for one family, but can be the right size for a community or a municipality.

“It can still be a community project and the neighbours should have a say in project design and siting,” he says.

Gunnar also doubts there is any economy of scale above tens of megawatts for renewable energy such as wind and solar. There are other reasons why big scale often prevails:

“When a community decides, they go for smaller scale than a municipality, and government decisions tend to favour still bigger scale, often above what is optimal, just because it is a simpler decision,” he claims.

Photovoltaics are decentralised by their very nature, but need balancing in countries like Denmark.

Denmark now gets two per cent of its electricity from PV, but very little in the winter, during power use peaks, notes Gunnar.

One move towards the very big scale is very long power lines, for example planned interconnectors between Norway-UK and Denmark-UK.

“There are admittedly many benefits of interconnectors in for example the Nordic grid,” he says.

Denmark gets about 40 per cent of its electricity from wind power. That is possible today thanks to balancing provided by Norwegian and Swedish hydro.

“But power lines are not the only solution. We have fought against some such projects. They should not be built without good economic evaluation. They are expensive investments and can take away attention and funding from local solutions,” says Gunnar.

The combination of small and big seems to be the optimum, at least for Northern Europe, he adds.

Alternatives to power lines, for balancing, can be more demand-side management, storage of heat, hydrogen, and also batteries if they get cheaper.

What about other renewables?

Combined heat and power for district heating and in industry, fuelled by biomass, is a medium-scale technology.

“But it will have less of a future than was thought earlier, due to cheap electricity from wind and solar.”

Geothermal heat (not electricity) is a medium-scale technology that has been developed in Denmark, but which the present government has abandoned. It still has a large potential, to supply 10–30 per cent of Denmark’s heating requirements, according to Gunnar.

Solar heat is also of some, even growing, importance in Denmark, in particular for smaller district heating systems, where large thermal storage tanks even make seasonal storage feasible.

As for biomass, it consists of several parts. Biogas, to replace fossil gas for vehicles, heat and power, is often smaller scale, in the order of 100 kW to two MW. Biomass for heat and electricity can be small-, medium- or large-scale.

“Biomass has another problem of scale: Very long distance high-volume trade (such as from USA to UK power plants) should be avoided, but there is nothing wrong with some trade, or even that for example Sweden becomes a net exporter,” says Gunnar.

“In a very centralised system, people lose contact, and social networks do not function well. A human scale is needed to ensure public understanding of the energy transition. So decentralisation is an objective in itself, says Gunnar Boye Olesen.

Implementing the global rule to restrict the sulphur content in marine fuel oil to 0.5 per cent will cut shipping SO2 emissions by nearly 80 per cent and prevent more than 100,000 annual premature deaths.

It is now finally settled that the global cap of 0.5 per cent for the sulphur content of the fuel oil used by ships will apply from 1 January 2020.

A Europe powered only with renewable energy

This vision was launched in 1992 from within the world-leading power equipment company ABB. 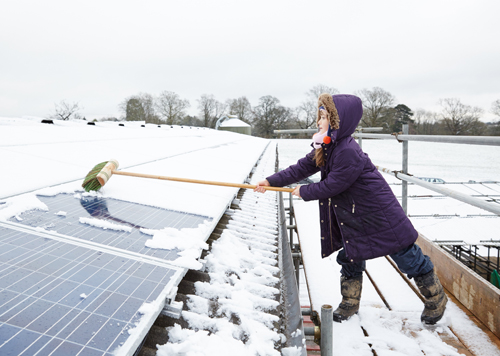 “Small is beautiful” was the catchphrase of the alternative energy movement of the 1970s.

In Paris an initiative called “4 per 1000” was signed by 25 countries, with the aim to protect and increase carbon stocks in soil and to develop accounting and safeguard criteria.

Reducing consumption of meat, dairy and eggs by three quarters in the EU will lead to reductions of 44 per cent in greenhouse gas emissions from the food sector, but other efforts are also needed to reach a 2-degree target.

A new study proposes that the agricultural sector needs to reduce emissions by 1 billion tonnes of CO2e per year by 2030 to contribute to the 2°C target.

Premature deaths due to air pollution cause annual global costs of about US$225 billion in lost work days, and more than US$5 trillion in welfare losses, according to a new study.

Germany must still eliminate 145 Mt of annual greenhouse gas emissions to achieve its 2020 climate target, 16 per cent below current levels.

Proposed gas strategy is a gamble with the climate

The EU, Norway and Russia are all promoting fossil gas as a long-term clean and sustainable energy solution. “There’s no such thing as clean gas”, says Friends of the Earth Europe.

The EU should seize the opportunity to replace ageing and end-of-life coal-fired plants with renewable energy sources.

The changed geopolitical situation in Ukraine has led to an energy crisis, and the country is now at a crossroads: sticking with coal and nuclear power or investing in renewables?

Overall air pollutant emissions keep on slowly shrinking – sulphur emissions show the biggest reductions, while there is much less improvement for ammonia and particulate matter.

Industry does not need CCS

NOAA: Reefs are boiled to death

The soaring temperature of the oceans is the “greatest hidden challenge of our generation”and global coral bleaching continues for a third year due to global warming.

A new study from the Netherlands shows that the air in heavily agricultural areas can be as risky to breathe as in traffic-choked cities.

Agriculture a major cause of air pollution

Food cultivation is the dominant source of fine particulate matter (PM2.5) in ambient air in Europe, the central US and parts of China, according to a new study from the Earth Institute at Columbia University.

Brussels has become the latest European region to face a legal challenge on its obligations under the EU air quality directive.

The measures announced by the UK government to tackle air pollution still don’t comply with EU air quality legislation and will not meet nitrogen dioxide limits in time, the country’s High Court ruled on 2 November.

WHO: Air pollution rising in cities

More than 80 per cent of people living in urban areas that monitor air pollution are exposed to levels that exceed the World Health Organization (WHO) guidelines.

Three hundred million of the world’s children live in areas where the levels of toxic air pollution are more than six times the international guidelines set by the World Health Organization (WHO) ..

Soon more than 500,000 electric vehicles on the roads

Europe will see more than half a million electric vehicles (EVs) on its roads by the end of 2016, according to the report “Electric vehicles in Europe – 2016” by Transport & Environment (T&E).

City authorities in southern Poland have won a legal victory over the introduction of new rules to combat local air pollution. The regulation, passed by the regional ..

The market for offshore wind turbines is going to grow explosively over the next 15 years in Denmark, and beyond the North Sea area and Europe, according to the OECD in a new analysis ..

CO2 levels above 400 ppm reality for many generations

The rapid entry into force of the Paris Agreement has created the legal basis for countries to increase their level of action and ambition to meet the 1.5°C warming limit over the next two years in the lead-up to 2018.

Planet could warm by 10°C

The planet would warm by a searing 10°C if all fossil fuels are burned, according to a new study published in Nature Climate Change, leaving some regions uninhabitable and wreaking profound damage on human health, food supplies and the global economy.